Introduction
Please see How the Eye Works for an introduction. Within the retina is a system of blood vessels – arteries, veins, and capillaries. This system of blood vessels nourishes the retina with oxygen. One large artery, the central retinal artery, carries blood to the retina. As the artery enters the eye, many branches spread out throughout the retina. The blood then goes through a fine network of very small vessels called capillaries. After the blood moves through this network of capillaries, it enters branches of veins, called, branch retinal veins. These then join together to form the large vein called the central retinal vein that drains the blood from the eye. 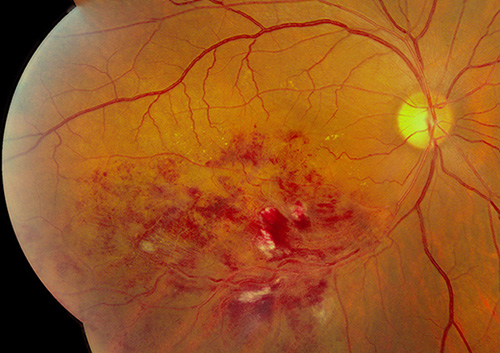 Retinal Photo of an eye with a branch retinal vein occlusion. There is blood in the retina due to the blocked vessel. This causes blurring of the vision.

Optical coherence tomography (OCT) shows a cross-section of the macula. Leakage of fluid into the retina causes the macula to thicken, similar to a dry sponge swelling as it absorbs water. Pockets of fluid and blood swell the retina (white arrow)

What is a branch retinal vein occlusion?
A branch retinal vein occlusion, or a BRVO, is a blockage of one of the retinal veins that carries blood from one region of the retina back to the central retinal vein. The blockage in a branch retinal vein causes a back up in blood flow, and increased pressure in the small capillaries. These capillaries then begin to ooze blood and serum. Serum is the clear sticky part of blood. This oozing of fluid into the retina is called retinal edema. Retinal edema and blood in the retina cause the retina to work poorly. The vision is blurred, distorted and may have splotches in it. Some blockages are relatively mild and the vision is affected only a little, while others are more severe and the vision is affected much more. Also, if the blocked vein does not drain the macula portion of the retina, the good central reading vision is not affected. In this case, the person may be unaware of the problem, or have only a vague sense of a shadow or darkening in their vision off to the side. Sometimes a BRVO can be so severe, that blood supply to the retina is inadequate resulting in the retina lacking enough oxygen. This is called ischemia. The eye tries to compensate by growing new blood vessels called, neovascularization. This is not helpful and neovascularization can cause bleeding into the center of the eye and an abrupt loss of vision. A BRVO most often occurs in patients with diabetes, hypertension, and atherosclerosis.

What is the treatment for a branch retinal vein occlusion?
The treatment for a branch retinal vein occlusion depends on the severity and location of the blockage. In certain instances, the retina is able to heal itself, and no treatment is necessary. However, usually treatment is necessary. Clinical studies have demonstrated that treatment with anti-vasogenic drugs Avastin™, Lucentis™ and Eylea™ are very helpful in restoring, and stabilizing vision. This treatment involves a series of injections into the eye that are usually given monthly for several months until the swelling in the retina resolves. Once it has resolved, the treatment interval is usually slowly extended to insure the swelling doesn’t recur. Typically, more treatments are needed during the first year and fewer the second year. It is not uncommon that treatment needs to be given at various intervals even 2 or more years following the original onset of treatment. Every person is different. Other drugs, Ozurdex™ and triamcinolone are also very helpful for treatment, particularly those that don't respond to anti-vasogenic drugs. In more severe cases, laser treatments are combined with the intravitreal injections to treat the leaking capillaries. More than one laser treatment may be needed. If the retina is very ischemic (lacking oxygen), laser treatment may be necessary to prevent further bleeding from neovascularization (new growth of abnormal blood vessels). If severe bleeding into the vitreous has already occurred, than vitrectomy surgery may be recommended to remove the blood.