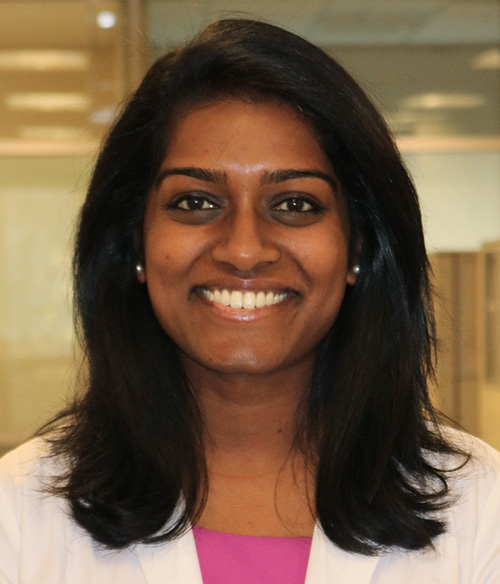 A 64-year-old man with diabetes and hypertension presents with blurry vision in both eyes.

Figure 1A: Color photo of the right eye. Note the scattered retinal hemorrhages and cotton-wool spots 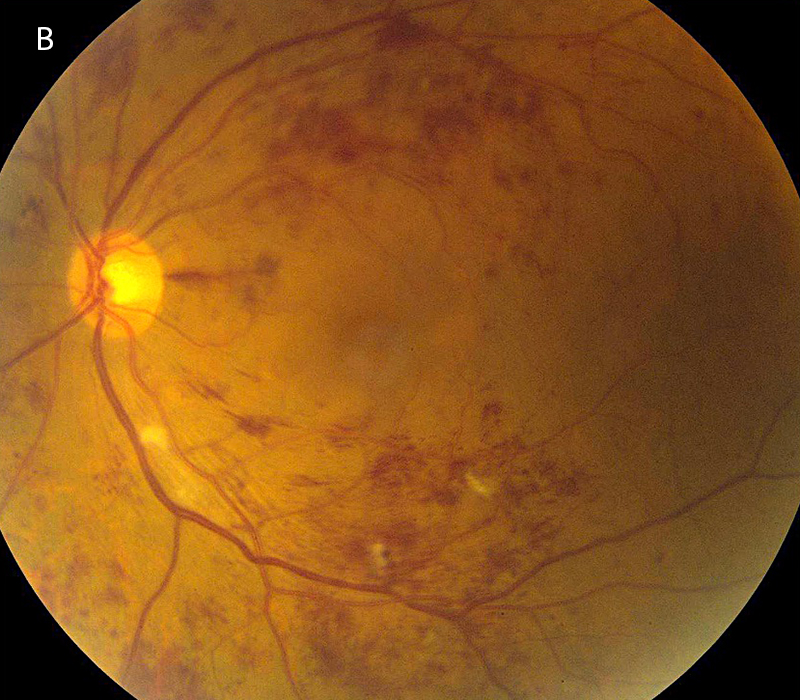 Figure 1B: Color photo of the left eye. More extensive retinal hemorrhages and cotton-wool spots are present in this eye.


The patient noticed progressive blurring of vision in both eyes for several weeks, primarily in the left eye. He did not have any history of a similar problem. He denied any flashes, floaters, curtain defect, pain, or headaches. His past ocular history was significant for cataracts and low-risk glaucoma suspect. Medical history was significant for systemic hypertension and insulin-dependent type 2 diabetes. His medications are losartan, lisinopril, furosemide, sitagliptin/metformin (Janumet), insulin (Glargine and Novolog). His family history was notable for diabetes and hypertension. He has an allergy to sulfa drugs. He denies use of tobacco or illicit substances.

The patient’s best corrected Snellen visual acuity measured 20/50 OD and 20/200 OS. Intraocular pressures were normal. Anterior segment exam showed mild cataracts. The fundoscopic exam of both eyes showed flames hemes, cotton wool spots, and dot blot hemes scattered throughout the posterior pole and periphery (Figures 1A and 1B). Optical coherence tomography (OCT) of the macula revealed subretinal fluid and macular edema in both eyes (Figures 2A and 2B). 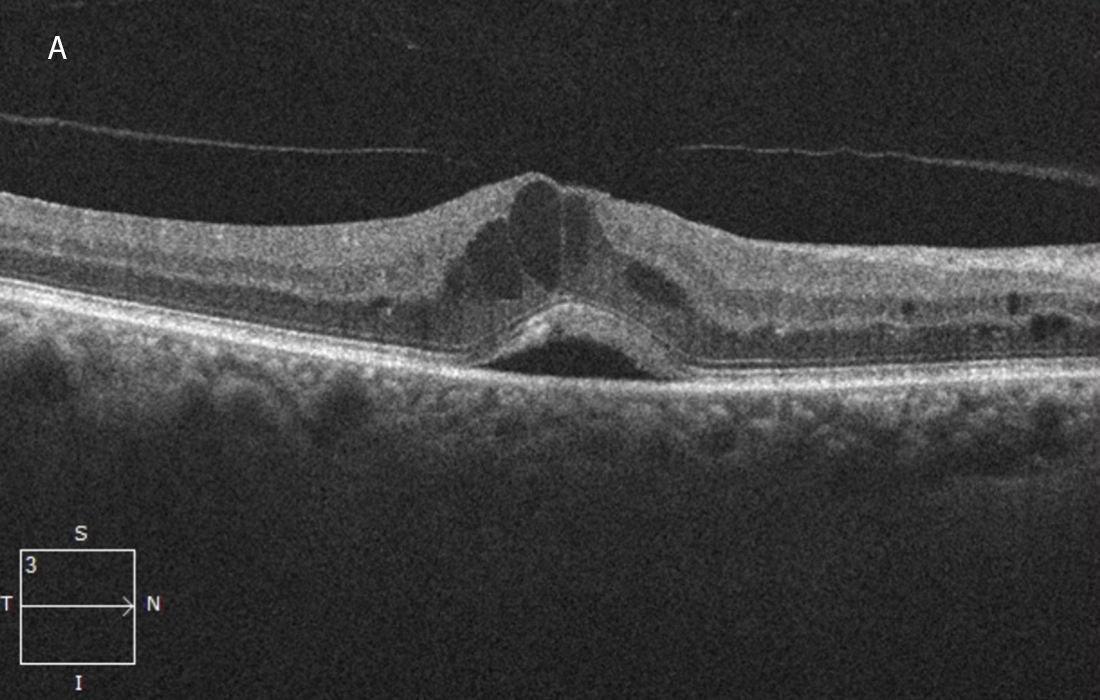 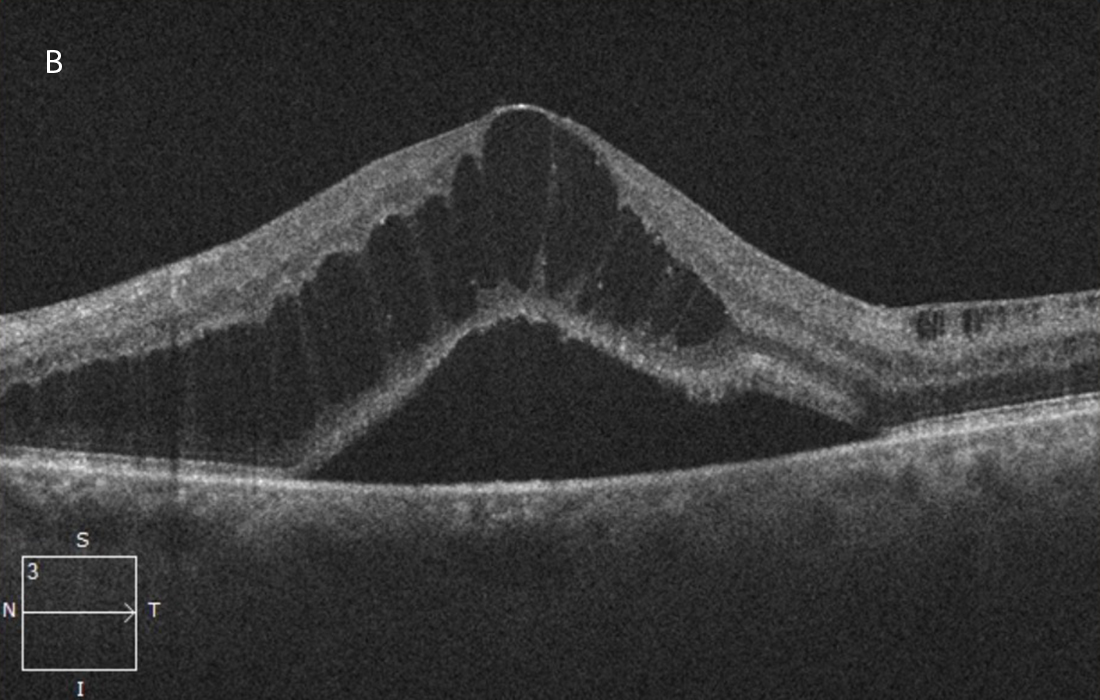 The patient was treated with 3 monthly injections of bevacizumab followed by 2 injections of aflibercept, after which the macular edema had significantly improved but the subretinal fluid persisted (Figures 3A and 3B). 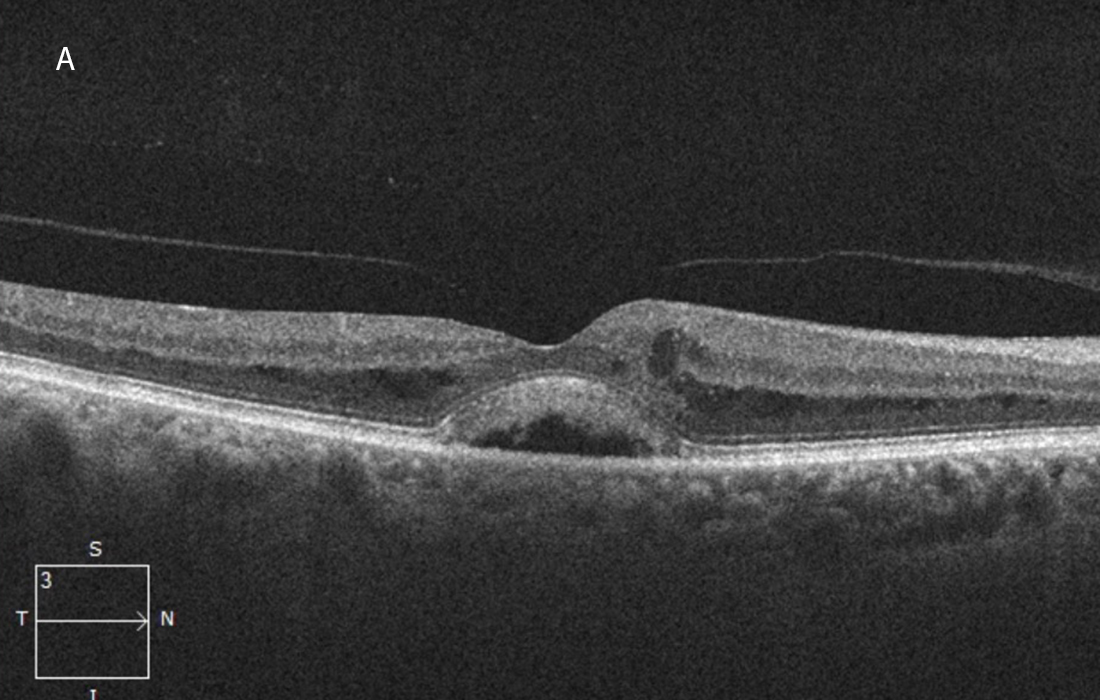 At initial presentation, the patient stated he had been diabetic for only 1-2 years and that his blood glucose was well-controlled (last A1C 6.4). He also reported excellent control of his blood pressure. Review of systems was positive for fatigue, weight loss, and bilateral leg pain. He was sent to an internist for further evaluation and workup.

The patient was admitted to the hospital for expedited treatment, consisting of three plasmapheresis sessions and IV rituximab. This was followed by three cycles of outpatient chemotherapy (rituximab and bendamustine).

One year from initial presentation, after continued treatment with intravitreal injections, initial plasmapheresis, and three cycles of combination chemotherapy, the patient’s retinal findings were significantly improved. Imaging studies showed resolution of the hemorrhages and resolving cotton wool spots (Figures 4A and 4B). Best corrected Snellen visual acuity improved to 20/25 OD and 20/32 OS. On OCT, the macular edema was mostly resolved and only a small persistent pocket of subretinal fluid in the left eye (Figures 5A and 5B). 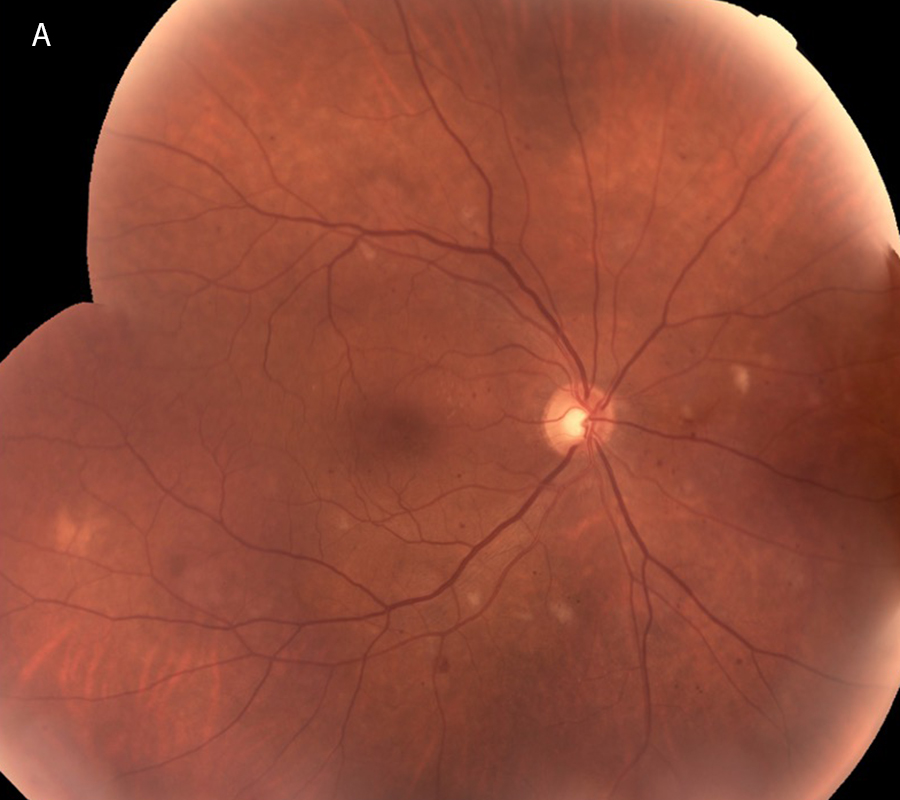 Figure 4A:Color photo montage of the right retina, one year following presentation and treatment with intravitreal injections, plasmapheresis and combination chemotherapy. Note that the Retinal hemorrhages have mostly resolved with a few cotton-wool spots remaining. 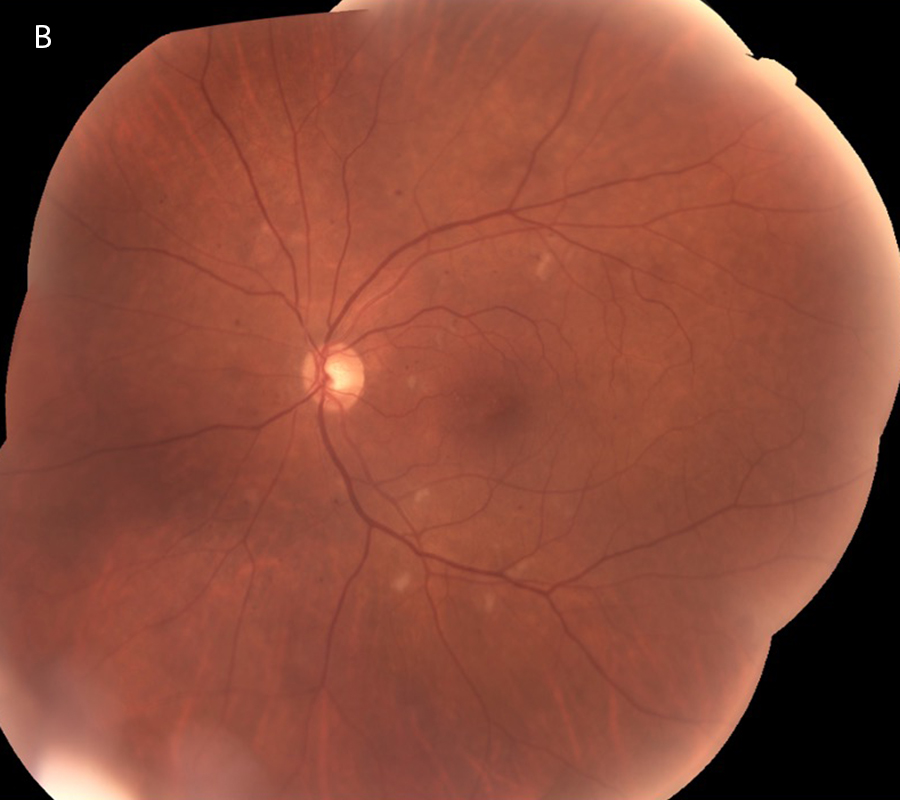 Figure 4B: Color photo montage of the left retina, one year following presentation and treatment with intravitreal injections, plasmapheresis and combination chemotherapy. Note that the Retinal hemorrhages have mostly resolved with a few cotton-wool spots remaining. 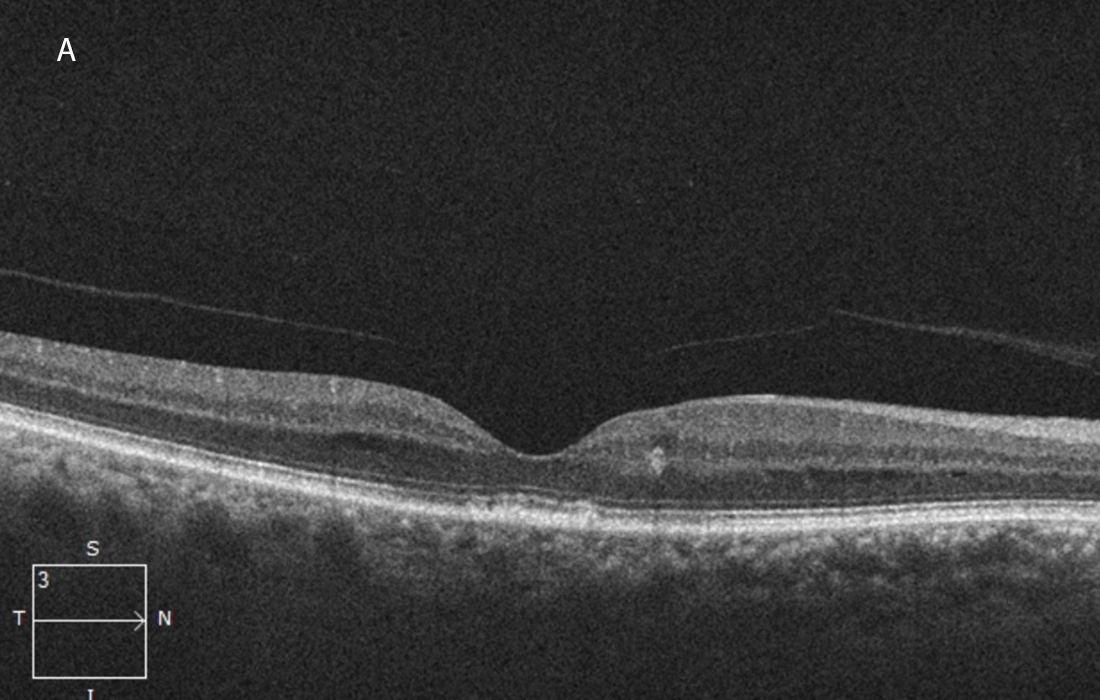 Figure 5A: OCT-SD horizontal OCT scan of the right macula, one year following presentation and treatment with intravitreal injections, plasmapheresis and combination chemotherapy. The macular edema and subretinal fluid have resolved. 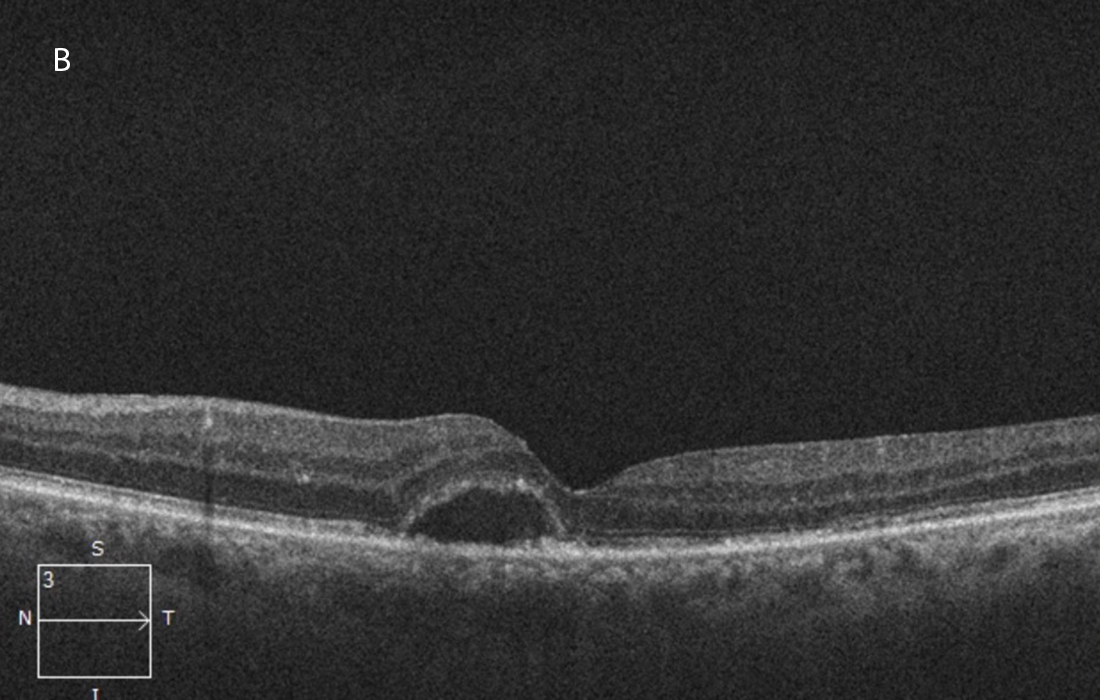 Figure 5B:OCT-SD horizontal OCT scan of the left macula, one year following presentation and treatment with intravitreal injections, plasmapheresis and combination chemotherapy. The macular edema has resolved, but some subretinal fluid persists.

Monoclonal gammopathy, or paraproteinemia, is the presence of excessive amounts of a single monoclonal immunoglobulin in the blood. It is usually the result of an underlying immunoproliferative disorder and includes diseases such as multiple myeloma, immunocytoma, and Waldenstrom's macroglobulinemia.1

Initial treatment involves managing acute symptoms due to hyperviscosity from excessive intravascular IgM. Plasmapheresis, a method of blood exchange which filters out 35-48% of IgM protein, is performed initially. Once serum IgM levels are effectively reduced, chemotherapy is used for source control and maintenance. Traditional chemotherapeutic agents, particularly chlorambucil (Leukeran), cyclophosphamide (Cytoxan) and/or melphalan (Alkeran) either as single agents or in combination with others, have been used in the management of this disease for over 40 years but are not commonly used today. The monoclonal antibody, rituximab, has been found to be effective. Many new therapies have been introduced in the past few years and including bortezomib, ixazomib, carfilzomib, bendamustine ibrutinib, zanubrutinib and acalbrutinib. The U.S. Food and Drug Administration (FDA) has approved the use of ibrutinib and zanubrutinib for Waldenstrom’s macroglobulinemia.1,3

There are several proposed theories on the pathophysiology of serous macular detachments in patients with Waldenstrom’s macroglobulinemia. One theory is that accumulation of IgM in the blood causes hyperviscosity leading to venous stasis. This contributes to hypoxia, endothelial decompensation, and breakdown of the inner blood retinal barrier. Extravasation of plasma including IgM from the blood vessels leads to its accumulation in the subretinal space, causing an osmotic gradient and/or direct accumulation of subretinal fluid.1 Another theory is that IgM deposits on Bruchs and in the choriocapillaris leads to breakdown of the outer blood-RPE barrier, causing a dysfunctional RPE pump and accumulation of subretinal fluid.1

The role of anti-VEGF treatment is less clear. Several papers have shown that the sera of Waldenstrom’s macroglobulinemia patients are associated with increased levels of angiogenic cytokines, such as angiogenin, VEGF, and basic fibroblast growth factor.6 However, a 2013 case report by Besirli et al demonstrated a lack of response with anti-VEGF therapy, panretinal photocoagulation, and intravitreal triamcinolone, citing that vascular wall breakdown in Waldenstrom macroglobulinemia is not due to VEGF mediation, but rather due to transudation and breakdown of the RPE pump.5 In a 2015 case report by Xu et al, the authors report a Waldenstrom macroglobulinemia patient with intraretinal and subretinal fluid, demonstrating significant improvement in intraretinal fluid after bevacizumab treatment, but persistent subretinal fluid. The authors inferred that while the bevacizumab may have caused a decrease in vascular permeability and improvement in the integrity of inner blood retinal barrier, IgM may remain in the subretinal space, leading to persistent subretinal fluid.7 Systemic therapy to reduce IgM levels appears to be the most viable treatment for maculopathy, with a lesser role for anti-VEGF treatment.7