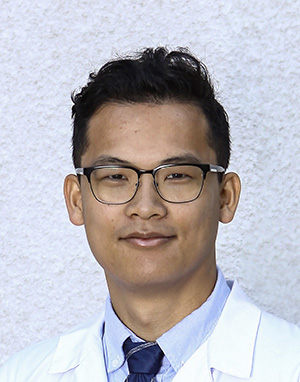 A 57-year-old Caucasian woman presented with chief complaint of blurry vision in the right eye. 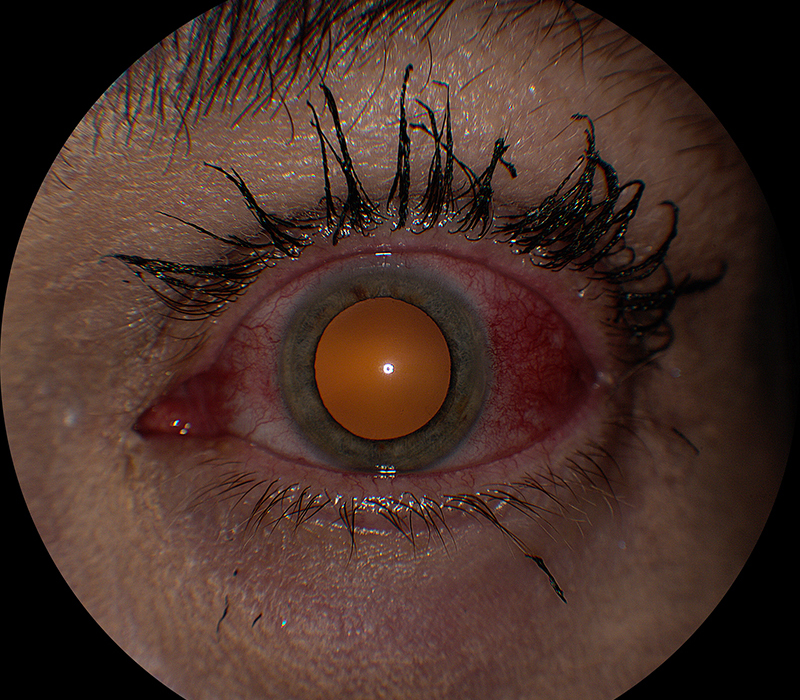 Figure 1: External photo of the left eye. Note the area of intense injection over the temporal sclera. 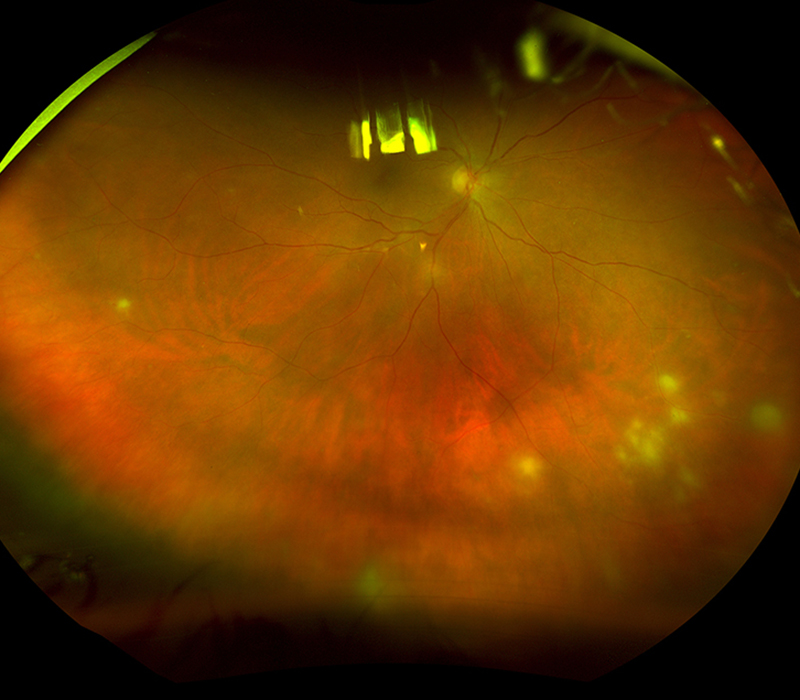 
Review of outside records indicated that she had developed left sided periorbital erythema and edema associated with inability to open the left eyelids three-and-a-half weeks prior, and had been treated with a four day course of oral corticosteroids by her local urgent care provider. However, she noted no symptomatic improvement after one week, and consulted with a community ophthalmologist who noted the presence of left-sided scattered periorbital lesions, diffuse conjunctival injection, inferior chemosis, inferior corneal subepithelial infiltrates, and mild anterior chamber cell. Examination of the right eye was unremarkable. The patient was prescribed a 10-day course of acyclovir and topical corticosteroid eyedrops to treat suspected herpetic uveitis on the left. She was lost to follow up for two weeks, only to return when she noted decreased vision in her right eye. Her ophthalmologist referred to our clinic for evaluation of new-onset inflammation of the right eye. The patient’s best-corrected visual acuity measured as 20/60 on the right and 20/20 on the left. Her intraocular pressures were normal, and assessment of her extraocular motility and confrontational visual fields was unremarkable. Examination of her anterior segments was remarkable for keratic precipitates with severe anterior chamber reaction on the right, and temporal scleritis with a quiet anterior chamber on the left eye (Fig. 1). Ophthalmoscopic examination identified moderate vitritis and peripheral, multifocal necrotizing retinitis on the right (Fig. 2), but was unremarkable on the left. Fluorescein angiography of the right eye showed areas of retinitis and vasculitis (Figs 3A and 3B). 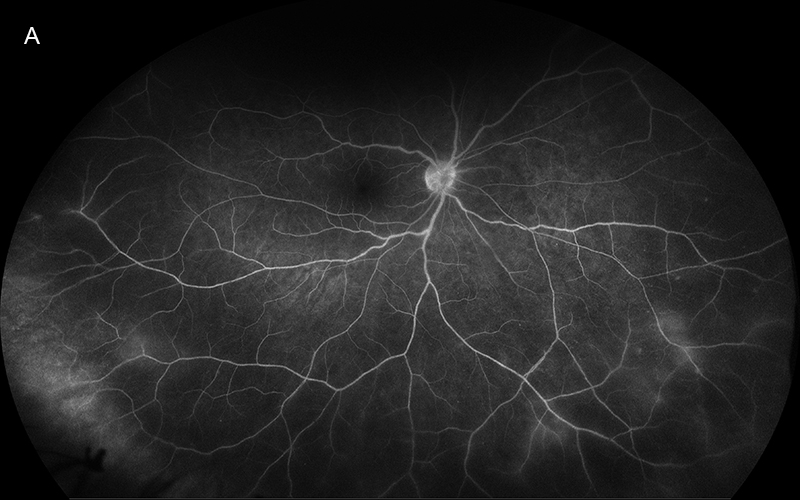 Figure 2: Wide-field color fluorescein angiogram of the inferior retina of the right eye. Note the multiple areas of retinal vasculitis. 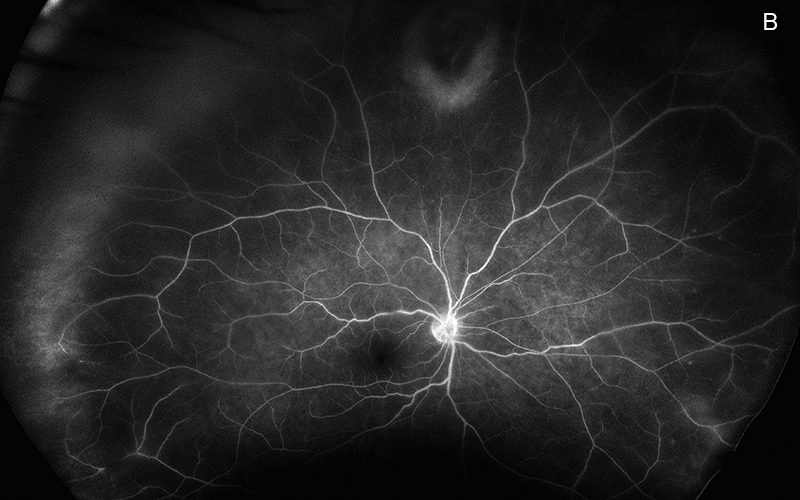 Serologic workup for syphilis, tuberculosis, sarcoidosis, toxoplasmosis, and human immunodeficiency virus was negative, but polymerase chain reaction (PCR)-based testing of aqueous humor detected varicella zoster virus (VZV) DNA. The patient was diagnosed with unilateral herpes zoster ophthalmicus (HZO) with sclerouveitis followed three weeks later by contralateral necrotizing zoster retinitis, a clinical picture consistent with the von Szily reaction (VSR). Oral valacyclovir and corticosteroid were added to the topical corticosteroid and topical cycloplegic/mydriatic drops used to control her anterior uveitis. At the last examination, 19 months after presentation, she showed no signs of scleritis, uveitis, or retinitis in either eye and her best-corrected visual acuity had improved to 20/32 on the right and 20/20 on the left.

von Szily first reported that rodents given an intracameral inoculation of herpes simplex virus type-1 (HSV-1) in one eye developed ipsilateral anterior uveitis followed by contralateral necrotizing retinitis.1 This unique pattern of bilateral, sequential herpetic uveitis has since been shown to occur via viral spread along parasympathetic fibers of the oculomotor nerve to the ipsilateral ciliary ganglion, then to the Edinger-Westphal nucleus, thereafter to the suprachiasmatic area of the hypothalamus, and finally crossing over to the contralateral optic tract, optic nerve and retina.2 Sparing of the ipsilateral retina is believed to be mediated by CD4+ and CD8+ T-cell dependent mechanisms.3,4 While von Szily’s observations have been reproduced and studied further in several animal models,5,6 reports of the phenomenon in human subjects have been rare. When observed, this unique series of events has been referred to clinically as the VSR.7 To the best of our knowledge, a total of 11 clinical reports of VSR have appeared in the literature.7-15

Since the diagnosis of a VSR requires the presence of necrotizing retinitis and since necrotizing herpetic retinitis is most often due to VZV,18 it is perhaps not surprising that VZV was implicated in most clinical reports of VSR. As the diagnosis of VSR also requires the presence of anterior infection in the presenting eye, and the most common cause of VZV-related anterior uveitis is HZO,19 it follows therefore that most cases of the VSR began as HZO. Of eight known cases of VZV-associated VSR, all but one had one or more risk factors for VZV reactivation.15 Nearly two-thirds were over 50 years of age, just over one-third had an underlying malignancy, one quarter received treatment with immunotherapeutics, and just over one-third possessed a combination of the above-mentioned risk factors.15 Each of these risk factors have been associated separately with VZV reactivation.20-24

Most patients with VSR retained vision better than or equal to 20/30 in both eyes following treatment.15 However, eyes that developed optic nerve involvement or retinal detachment had a final visual acuity that ranged from hand motion to no light perception.15 Contralateral eyes with necrotizing retinitis accounted for four of the five eyes left with poor vision at final visit.15

The VSR is a rare clinical syndrome characterized by bilateral, consecutive, ocular herpes virus infection. The vast majority of cases were associated with VZV, most commonly presenting as HZO with anterior uveitis, keratitis, or both. Patients with VSR were often relatively immunosuppressed and prone to VZV reactivation by dint of age or underlying medical conditions. All reported VSR patients developed necrotizing retinitis in the fellow eye, which resulted in poor long-term vision in one-third of these eyes.