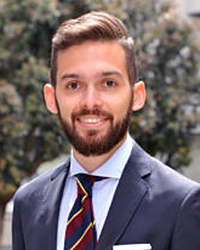 Figure 1A: Wide-field color photo of the right eye, 12 days following cardiac arrest. Note peripapillary retinal hemorrhages that were preretinal, intraretinal and subretinal. Some dehemoglobinized blood appears to be present as well. A cotton wool spot is noted in the superotemporal arcade. 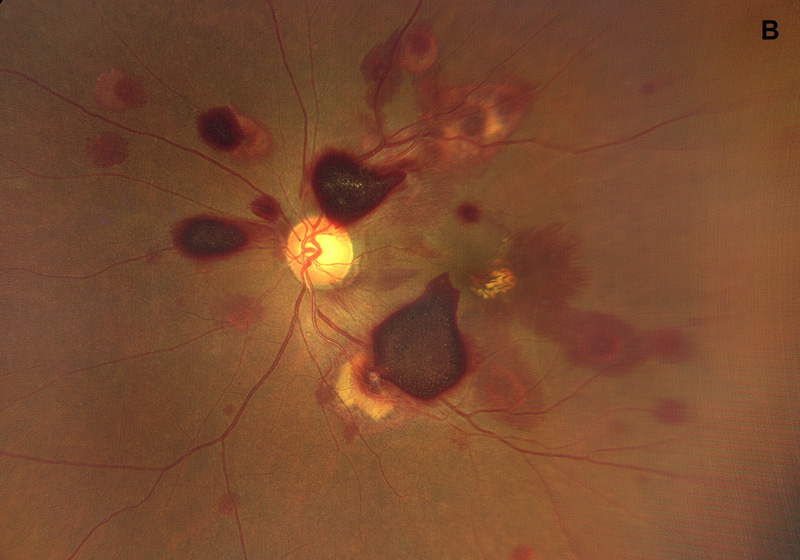 Figure 1A: Wide-field color photo of the left eye, 12 days following cardiac arrest. A similar appearance of retinal hemorrhages is noted as is present in the right eye.

During his fourth post-operative week, he experienced cardiac arrest and received two minutes of CPR with chest compressions, one dose of IV epinephrine and one dose of IV atropine before return of spontaneous circulation (ROSC) was achieved. His blood pressure before CPR was noted to be 7/35 and after ROSC to be 145/69. At the time of his cardiac arrest he was receiving anticoagulation with a heparin drip and was receiving aspirin 81 mg QD. Laboratory evaluation at the time of arrest demonstrated hemoglobin of 7.7 g/dL and platelets of 72 per uL, as well as a prothrombin time of 16.3 seconds, partial thromboplastin time of 33.5 seconds, and International Normalized Ratio of 1.3.

On examination, his best-corrected visual acuity was count fingers at 10 feet in the right eye (OD) and 20/400 in the left eye (OS), having declined from 20/50 and 20/25, respectively, two days prior. The remainder of his anterior segment exam was normal in both eyes (OU). Fundus examination revealed bilateral peripapillary hemorrhages as well as pre-retinal, intra-retinal and sub-retinal hemorrhages with areas of de-hemoglobinized blood in both eyes. Imaging was done 12 days following cardiac arrest (Figures 1A and B). A few cotton wool spots were noted in the right eye. Optical coherence tomography confirmed outer plexiform layer and sub-retinal hemorrhages OU (Figure 2A and B). The patient survived his hospitalization and the retinal hemorrhages resolved without intervention. Eight months later, his visual acuity was 20/40 OD and 20/20 OS. His exam was notable for retinal pigment epithelial mottling in the mid-periphery (Figures 3A and B) and patchy regions of disruption of the photoreceptor layer and ellipsoid band that were identified on OCT OU (Figures 4A and B).

Figure 2A: SD-OCT of the right eye, 12 days following cardiac arrest. A horizontal scan through the macula shows retinal thickening due to intra- and subretinal blood.

Figure 2B: SD-OCT of the left eye, 12 days following cardiac arrest. A horizontal scan through the macula shows intra- and subretinal blood. 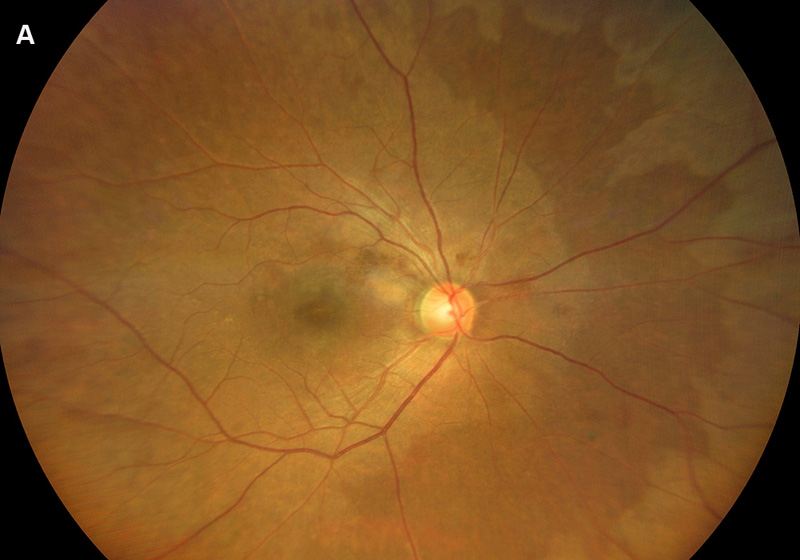 Figure 3A: Wide-field color photo of the right eye, eight months after his cardiac arrest. The extensive hemorrhages have diminished centrally, and areas of subretinal hemorrhage are noted peripherally. 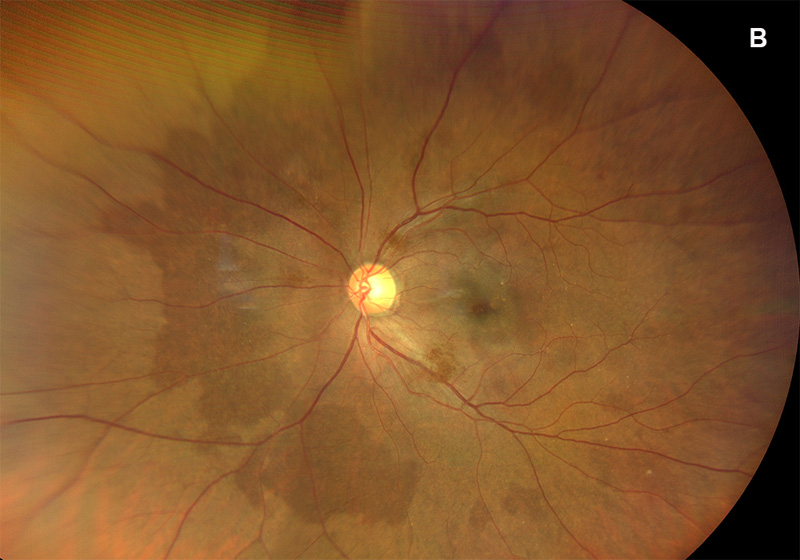 Figure 3B: Wide-field color photo of the left eye, eight months after his cardiac arrest. As noted in the right eye, the extensive hemorrhages have diminished centrally, but areas of subretinal hemorrhage are noted peripherally.

Figure 4A: SD-OCT of the right eye. A horizontal scan through the macula shows resolution of the intraretinal and subretinal hemorrhages, but disruption of the outer retina in the fovea is noted, consistent with some reduciton in his vision.

Figure 4B: SD-OCT of the left eye. A horizontal scan through the macula shows intraretinal hyperreflective changes, but resolution of the hemorrhage.

An association between cardiopulmonary resuscitation (CPR) with chest compressions and retinal hemorrhage in infants has been previously reported, although this is a controversial topic with important legal implications. Prospective studies of infants undergoing CPR in a hospitalized setting as well as histopathologic studies have been unable to firmly demonstrate an association between CPR and retinal hemorrhage in the absence of other risk factors, such as trauma, retinopathy of prematurity or systemic coagulopathy.1 However, there are a limited number of reported cases of infants who demonstrated new retinal hemorrhages following CPR and who had had dilated fundus examinations prior to cardiac arrest demonstrating absence of hemorrhage.2,3 A review of the literature failed to find reports of this presentation in an adult, suggesting that retinal hemorrhage following CPR is very rare in adult patients.

In documented cases of retinal hemorrhage subsequent to CPR in infants, the mechanism by which CPR leads to retinal hemorrhage is controversial. Several mechanisms have been proposed, including one by which an abrupt rise in central venous pressure directly transmits through the ophthalmic venous circulation with resultant intraocular hemorrhage, or another by which elevated central venous pressure leads to a rise in intracranial pressure (ICP) with resultant compression of ophthalmic venous structures along the optic nerve sheath and intraocular hemorrhage in a Terson’s-like mechanism.2 Asphyxia during cardiopulmonary arrest may also lead to cerebral edema with subsequent elevation of ICP.2,4

The mechanism of retinal hemorrhage in this patient is unclear. An abrupt increase in his blood pressure was noted after CPR, and it is possible that this may have been a causative factor of his retinal bleeding. However, there is notable resemblance between the morphology of his retinal hemorrhages and those noted in Terson’s syndrome. The mechanism by which retinal hemorrhage appears in Terson’s syndrome is similarly controversial but may relate to elevated ICP. Studies by Muller and Deck demonstrated distension of the optic nerve sheath in patients with subarachnoid hemorrhage as well as hemorrhage primarily in the subdural rather than subarachnoid space, possibly suggesting that transmission of ICP along the optic nerve may lead to stretching of the dural sheath, causing focal hemorrhages which compress the ophthalmic vein and thereby cause intraocular hemorrhage.5 However, Hayreh demonstrated in Rhesus macaques that large elevations in ICP lead to only modest increases in ophthalmic venous pressure as measured by direct cannulation, and therefore concluded that the hemorrhages associated with Terson’s syndrome were more likely caused by elevations in systemic venous pressure.6 It is difficult to parse these potential etiologies in our patient, and it is possible that any of the previously discussed mechanisms may have contributed to his retinal hemorrhages.

Hemorrhagic retinopathy in an adult following CPR with chest compressions is very rare. The prominence of the retinal hemorrhages and the relative absence of ischemic findings distinguishes this patient’s presentation from Purtscher-like retinopathy, which is more frequently observed following chest compressions and which is thought to be caused by embolic occlusion of retinal arterioles. In Purtscher-like retinopathy, however, retinal cotton wool spots and intra-retinal infarctions or Purtscher flecken are the predominant findings, while retinal hemorrhage is typically present but minimal.7 This case is notable as well for the fact that retinal hemorrhages were observed shortly after CPR and were not observed on dilated fundus examination only two days before the patient experienced cardiac arrest. The patient in this report had several risk factors that may have predisposed him to developing retinal hemorrhages, including thrombocytopenia, systemic anticoagulation with heparin and aspirin, cirrhosis, and systemic infection with disseminated mucormycosis. Clinicians should be aware that retinal hemorrhage may occur in patients following CPR, especially in patients with other risk factors for systemic coagulopathy, and should be vigilant for visual symptoms in patients following resuscitation. Further studies are needed to elucidate the mechanism of bleeding in this context.