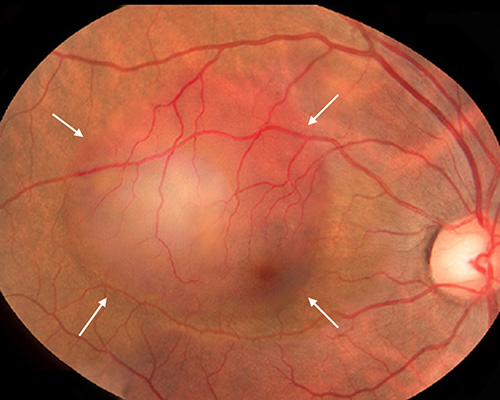 Retinal color photograph of a patient with Central Serous Retinopathy. The arrows point to a blister of fluid under the retina 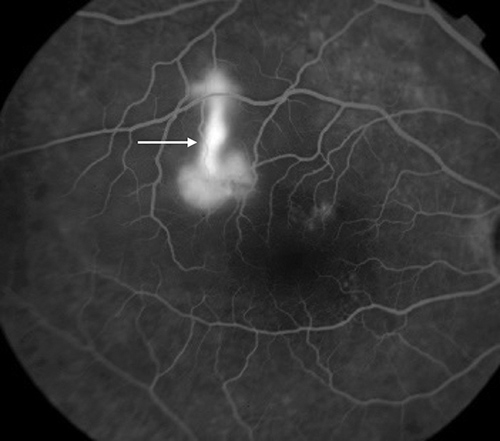 Fluorescein angiogram of a patient with central serous retinopathy. The arrow points to an area of fluorescein dye leaking under the retina causing the blister of fluid seen on the color retinal photograph and on the Optical Coherence Tomography study below.

Introduction
Please see How the Eye Works for an introduction. Under the retina is a pigmented layer called the retinal pigment epithelium (the RPE). Beneath this layer is the choroid which has many blood vessels. One of the functions of the RPE in a healthy eye is to prevent fluid from leaking from the blood vessels in the choroid into the retina.

What is a Central Serous Retinopathy?
Central serous retinopathy or CSR is condition in which the RPE that keeps the retina dry allows fluid to “leak” serum that accumulates under the retina. As the macula becomes affected with fluid, a “blister” (arrows) or “bubble” of fluid develops that prevents the retina from functioning. This causes the vision to be blurred and distorted. People sometimes describe a smudge or dark spot in their vision. Also, a difference in the size of an image viewed with the normal eye as compared with the affected eye. Central serous retinopathy may be caused by extreme stress. Corticosteroid medications in any form may also cause central serous retinopathy. However, in many patients no specific reason for CSR is found. CSR usually improves without treatment within 3 to 4 months

The white arrow points to the blister of fluid under the retina due to leakage of fluid that has lifted up the retina.

What is the treatment for central serous retinopathy?
The treatment for a CSR depends on the severity. In many instances, no treatment is necessary. In more severe cases, laser is occasionally recommended in the hopes of making the “blister” resolve sooner. Another type of treatment is Photodynamic Therapy. This uses a special dye that is given in a vein, and a low power laser is used to activate the dye to seal the leak. Although most patients eventually see well, some patients may suffer from recurrent or severe “blisters” that permanently affect vision.