What is a Choroidal Nevus?
Please see How the Eye Works for an introduction. Under the retina is a pigmented layer called the choroid. This layer is very rich in blood vessels, and is pigmented. The pigment in this layer is the same as in our skin. A choroidal nevus is a growth that arises from pigmented cells in the choroid. These are typically benign and are relatively common. Approximately 5% of people have at least one. They usually do not affect vision and so most people are unaware of their presence. It is most often detected during a routine dilated eye exam. In most cases, no treatment is necessary. Like moles on the skin, a choroidal nevus should be monitored to insure that it doesn’t change and grow. Features of the nevus can be very helpful to predict the risk of growth. These features include: the size and thickness, the presence of orange pigment, fluid leakage over the surface of the nevus, presence of drusen, and location within the eye. Larger and thicker nevi are commonly referred to as a suspicious nevus. These suspicious nevi need to be monitored most closely. If a nevus grows, it is very possible that it is a small melanoma. Even if a suspicious nevus does NOT grow, continued observation is very important. It is a misconception to assume that if it hasn’t grown in a few months, or even after a few years, that it will never grow. 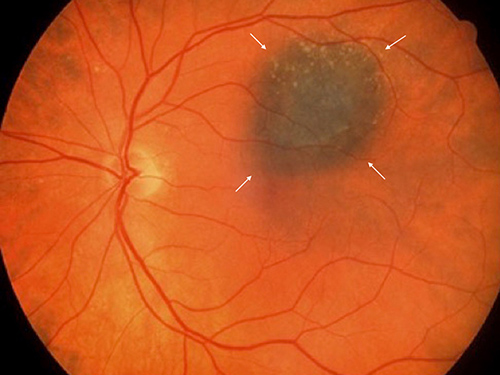 Retinal Photograph of an eye with a choroidal nevus (arrows)

What is the treatment for a choroidal nevus?
In most cases, no treatment is necessary other than periodic examinations. In addition to the eye examination itself, photographs and ultrasound evaluation to measure the thickness of the nevus are commonly done to accurately document the size and appearance of the nevus. The frequency of evaluations will depend on a number of factors including the appearance of the nevus, and how long it has been present, among other factors. In some instances, the nevus may leak serum (the clear sticky part of blood), under the retina. If this leakage affects the central vision, than treatment of the leakage may be recommended. This is most often treated with laser photocoagulation or photodynamic therapy. Both are in office procedures

Retinal Photograph of an eye with a malignant choroidal melanoma

Malignant “choroidal” melanoma arise from a layer under the retina called the choroid. Please see ‘How the Eye Works’ for more detailed description of the eye. In North America, about 6-7 out of each million people will be diagnosed with a choroidal melanoma each year. It is the most common malignancy that occurs in the eye. Malignant choroidal melanomas can spread to other parts of the body.