Introduction
Floaters are very common, and most people will see some. However, a sudden change, or sudden increase in floaters can be an indication of a potentially serious problem in the eye. If this occurs, a thorough, dilated eye examination is very important.

The vitreous fills the center of the eye. When we are younger, it is more gel like and is attached to the retina (the seeing tissue that lines that back of the eye) 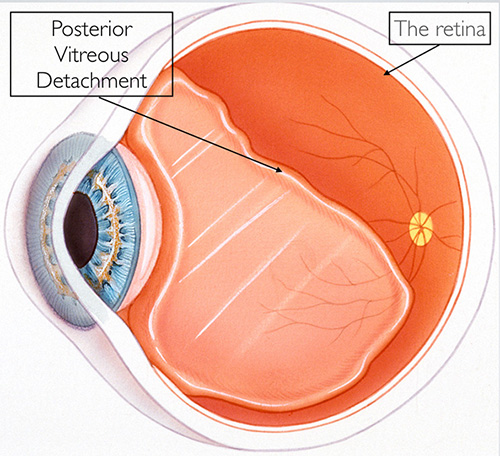 The vitreous has become less solid and gel like, and has pulled away, or 'detached' from the retina. This is called a posterior vitreous detachment

What are Floaters?
The center of the eye is filled with a thick gel-like fluid called the vitreous. This fluid contains some fibers. When we are young, the vitreous is attached to the surface of the retina, which is the seeing tissue at the back of the eye. As we grow older, the vitreous becomes less thick. At some point, the vitreous can abruptly pull away from the retina at the back of the eye. This is called a posterior vitreous detachment (PVD). As the vitreous pulls, it can stimulate the retina and cause very brief flashes of light that are usually seen off to the side of our vision. Most people will see these at night, or in dark rooms. Once a PVD occurs, the vitreous can move back and forth very easily. This movement of the vitreous, and the fibers within it, can be readily seen. These are called floaters. They may appear like fibers, cobwebs, dots, or circles. It is most easy to see floaters when looking at a lightly colored background, like the blue sky, or a white wall.

Why is it important to have my eye examined?
When someone suddenly sees more floaters, it is usually due to a PVD. In most cases, a PVD does not cause any problems. However, in some cases, the vitreous can tear the retina. A retinal tear can cause bleeding in the eye, and a retinal detachment. These are serious problems that require prompt treatment. When a posterior vitreous detachment occurs, and new floaters are seen, a complete dilated eye exam is necessary.

What can be done about floaters?
When a PVD occurs, it is common for the vision to be more blurred. Most of the time, the floaters are mostly only a nuisance and do not interfere with vision. On other occasions, a clump of the vitreous seems to float more towards the center of the vision and cause more problems. In almost all cases, the bothersome floaters settle and move off to the side, and vision improves back to normal. This usually takes several weeks. Long term, people may be aware of an occasional floater, but this is not cause for concern, as long as there hasn’t been a sudden increase in the floaters. Rarely, people are very bothered by floaters, and their vision very blurred. There is no easy remedy for floaters, such as drops, or medications. In these rare situations, the vitreous gel can be removed with a surgery called vitrectomy. In almost all cases, though, it is best to give your eye many months to clear the floaters before considering surgery. We do not advocate laser treatment for vitreous floaters.